Welcome to Research Journal of Neurology and Neuro Disorders

Copyright: This is an open-access article distributed under the terms of the Creative Commons Attribution License, which permits unrestricted use, distribution, and reproduction in any medium, provided the original author and source are credited. Copyright © 2022; Abdulwahab Alahmari

This is a case of neurovascular compression syndrome that lead to a sudden hearing loss on unilateral side in a female patient. The blood vessel is looping the vestibulocochlear nerve on the effected side by tinnitus and sudden neurosensorial hearing loss. All the theories and hypotheses about what could cause such symptoms will be discussed in this paper in details. The condition of the looping artery will be presented on an MRI scan T2 3D constructive interference in steady state images which is the best in visualizing conditions like this one.

A forty-six-year-old female patient came to the emergency room (ER) complaining of loss hearing on the left side and hearing buzzing sounds (pulsation) coming from inside her body (i.e. tinnitus). An MRI was done which revealed a looped vessel looping the vestibulocochlear nerve at the cerebellopontine angle (CPA). The patient was referred to the neurosurgery clinic for follow up and treatment. The findings are as the following; the 7th and 8th cranial nerves are intact and normal appearance of internal auditory canals. No CPA lesions and normal inner ear structures at both sides. Noted partial opacification of left mastoid air cells by mucosal thickening; however; preserved trabecular pattern. A Looped vessel (artery) could be seen crossing around the left vestibulocochlear nerve at the entrance of the left internal auditory meatus; however; no definite nerve kinking could be detected see (Figure 1-4). 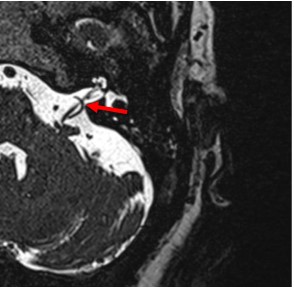 Figure 1: A brain MRI T2 3D constructive interference in steady state (CISS) shows the blood vessel (i.e. artery at the red arrow) looped around the vestibulocochlear nerve on the left side. 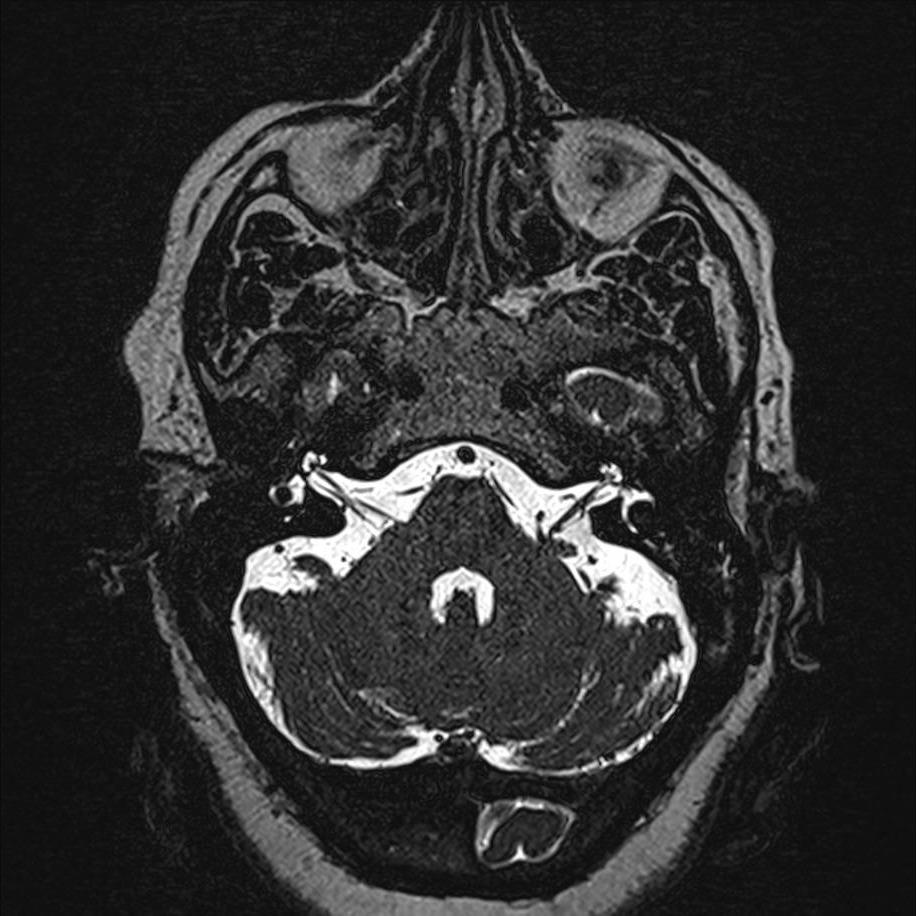 Figure 2: A brain MRI T2 3D CISS shows the blood vessel (i.e. artery) looped around the vestibulocochlear nerve on the left side. 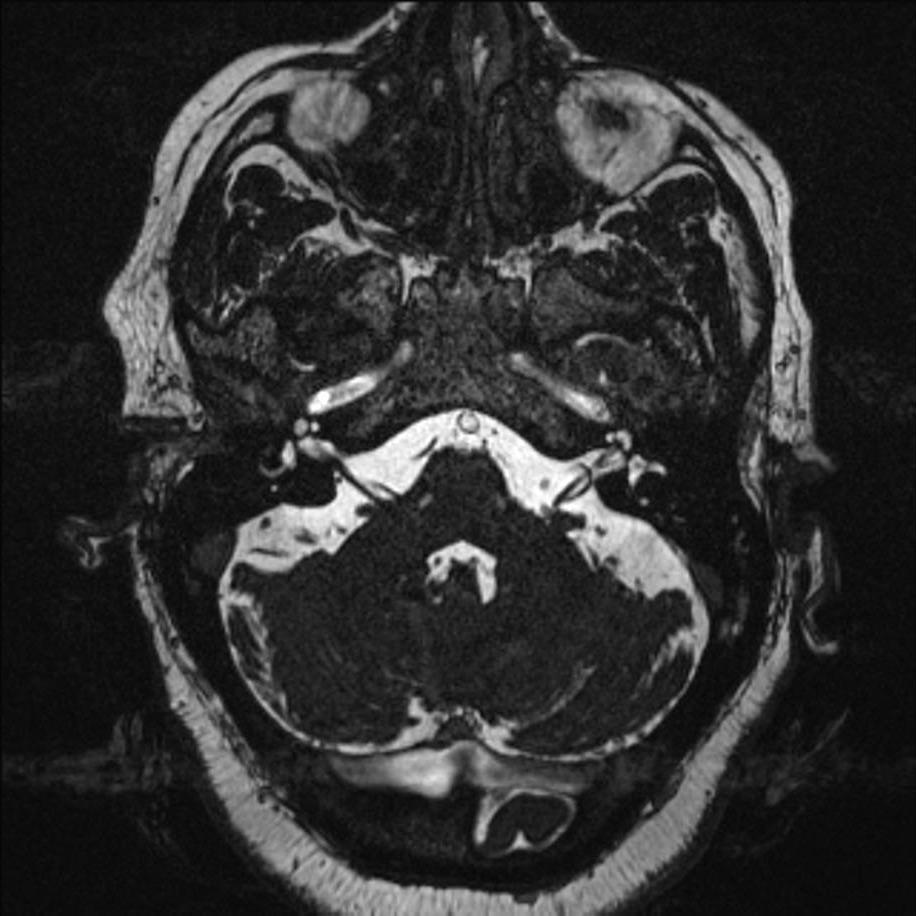 Figure 3: A brain MRI T2 3D CISS shows the blood vessel (i.e. artery) looped around the vestibulocochlear nerve on the left side. 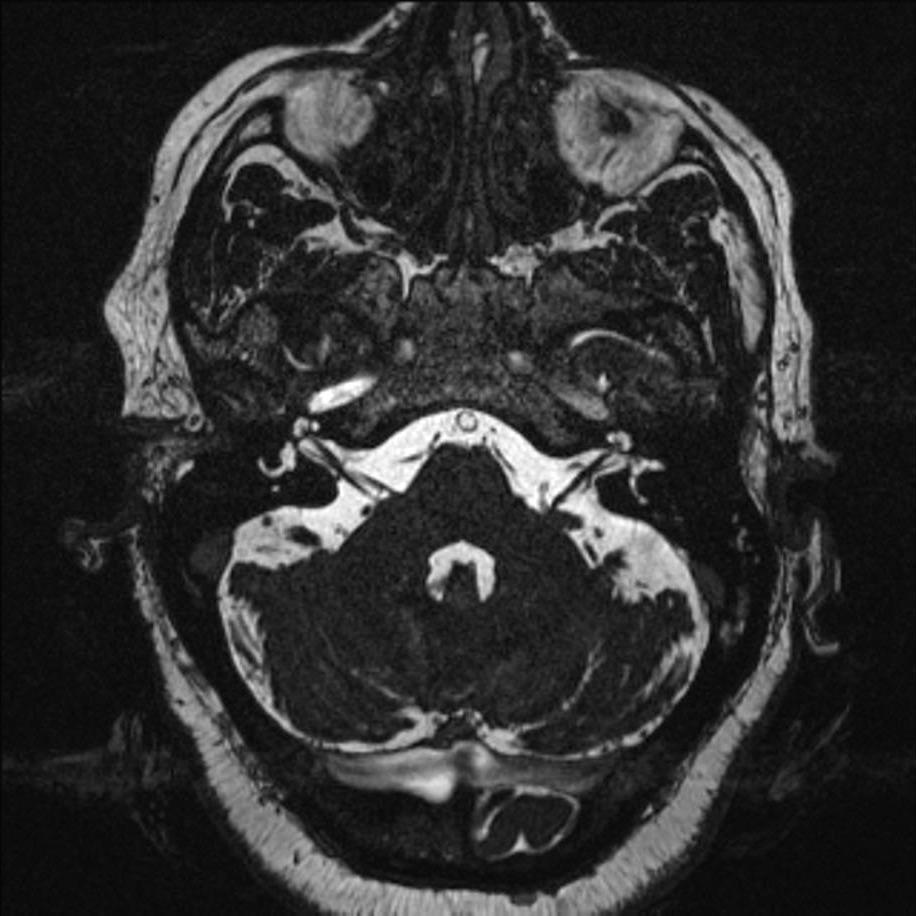 Figure 4: A brain MRI T2 3D CISS shows the blood vessel (i.e. artery) looped around the vestibulocochlear nerve on the left side.

The artery that is looping the vestibulocochlear nerve is most likely to be a branch of the anteroinferior cerebellar artery (AICA) like another published case with similar findings [1]. A paper claimed that there is an anatomical relation between the loop and the vestibulocochlear nerve, but there is no relation between the loop and tinnitus [2]. In this case, there is no seen compression see (Fig. 5), but the artery is moving due to pulsations which means it can touch the nerve. There are other findings that might be involved −in this case− which are the mucosa has some thickening and mastoid air cells have opacification. As well, there is no statistical significance in between the loops of all types and tinnitus [2]. Furthermore, the angulation of the eighth nerve has no statistical significance [2]. But the author is asking the wrong questions. How many normal participants who have looped AICA of all types and have no symptoms of tinnitus or hearing loss? This is will rule out any involvement of neurovascular compression syndrome in cases like this case. The author refuted two hypotheses which are; the pulsatile compression and hypoperfusion both due to neurovascular compression without providing any evidence or claim! The issue is the author is citing paper that does not support the author’s claims! McDermott’s paper which the author citied basically found that loop type 2 and 3 are associated with hearing loss, but the size of the artery diameter has no statistical significance [3]. The MRI T2 3D CISS is the best in visualizing cranial nerves pathologies. 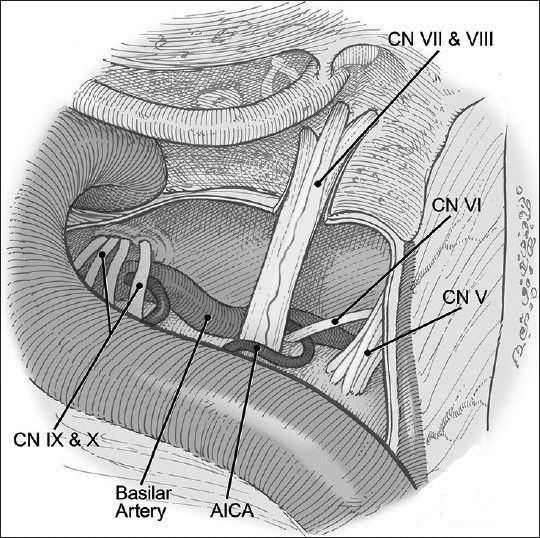 Unilateral tinnitus and sudden neurosensorial hearing loss can be caused by looping of the AICA on the eight cranial nerve. It might sound inductive to claim that looped vessel on 8th CN caused tinnitus, but there are many cases found the same findings. Therefore; from many findings we drew the conclusion. This case showed a looped vessel on the left side associated with hearing loss and tinnitus, while on the right side the artery is not looped and there is no hearing loss or tinnitus on the right side. Even if there is no seen compression, the pulsation and hypoperfusion will make the artery touch the nerve in a repeated fashion. Other factors were found to be have no statistical significance like; the type of the loop, the angulation of the 8th nerve, and the size of the artery diameter.